Gregory (Greg) Barnhill was born in Missouri on a farm and his family moved to Colorado when he was 1 ½ years old.  His family lived in Pueblo, CO till he was 12 when his father took a job in Houston.  Greg has lived in the Houston area since then.  Greg attended the University of Houston to pursue a degree in Political Science.  In April of his senior year of high school Greg met the love of his life, Sue.  She was a sophomore and they met at a scouting event at the Alabama Coushatta Indian Reservation in April 1972.  They had their first date the next week and have been together since and they will be married 46 years in August of 2020.

Greg and Sue have 2 children Greg Jr and Ashley.  Greg Jr is married and he and his Lindsey have just had their first child, Alec, in October of 2020.  Ashley is married and has two sons Hayden, 6, and Shane, 4.  The Barnhills have lived in Katy since 1984.  Greg Jr. is a general manager for a group of restaurants and his wife is a Managing Director for AIG.  Ashley is a special needs teacher for Comal ISD and her husband, Stephen, is the AD for Churchill Middle School.

The Barnhills have attended Cinco Ranch since 2001 and Greg has been a shepherd since 2006.  Sue has worked for Little Ranch Pre-School and works in the nursery.  Greg is the resource shepherd for the Children’s Ministry, Benevolence, Marriage and Prayer Ministries.   Greg helps lead our Junior High Mission trip to Camp of the Hills where he also serves on the Board of Directors.   Greg is also on the board of Little Ranch Pre-School and the shepherd liaison.  Greg is a 4 time cancer survivor and volunteers with Lifeline Chaplaincy in the Texas Medical Center as a Hospital Chaplain and serves on the development board for Lifeline Chaplaincy.  Greg also enjoys counseling newly diagnosed cancer patients for CanCare, a Christian based support non-profit.  One of Greg’s other passions is working for cancer research funding.

Sue is a homemaker and enjoys cross stich, cooking and spoiling the grandchildren.  Greg is employed as an Executive General Adjuster for Crawford Global Technical Services.  He adjusts and investigates large commercial insurance claims for Lloyds of London and other major insurance carriers.  When he is not working Greg enjoys soccer, cooking and fishing and telling jokes and puns. 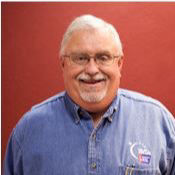